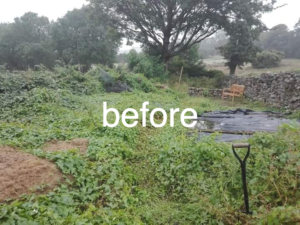 Spring seemed a long time behind us when Ane from Denmark turned up.  I had not intended to host Wwoofers in the summer months as that was peak season for our accommodation business, which is also used to house Wwoofers off-season, but Ane was so enthusiastic about the textile aspect of the project, being a spinner herself I could not say no and already I was learning that despite the huge strides we had made in  the weeds just will not wait! In a scene reminiscent of the red weed in War of the Worlds, the bind weed had invaded the whole garden, sneaking out anywhere the plastic let in the light, except where the Rhubarb was growing.  In the delightful Wwoofing way I had learned to love Ane took on those weeds with enthusiasm and determination until they all had been defeated. 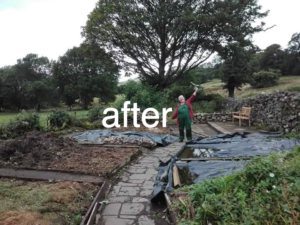 Inevitably  August is the rainy season in Cumbria, so Ane spent many happy hours in the studio combing and carding wool.  She also drunk in the view of the Ennerdale Water and encouraged me to spin al fresco and revisit the view it is sometimes easy to take for granted. There was just one fly in the ointment, or should I say “wasp” in the Rhubarb.  The 3 huge plants were buzzing and crawling with a whole nest/colony. Never one to back down from a challenge I used the opportunity to try my hand at making a wasp trap or 10.  Initially I thought I had made the holes too large as the wasps seemed to just fly in and feed on the sugar/jam/honey and fly out again…..3 days later…… 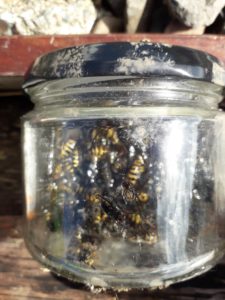 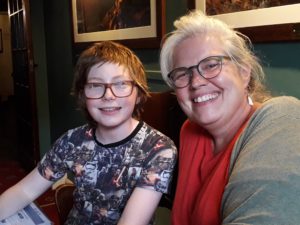