I can’t imagine in the history of googling that many people have ever googled “Mountaineering Spinning Wheel”.  I have seen people with drop spindles taking them around the world and with them to feed the goats, but I did not want to spin with a spindle. I wanted to make an impact.  Sitting on top of a mountain with a spinning wheel that looked like had earned its place to be carried to the summit.

Once I had navigated my way through the pages of physics explaining the balance in “Light Weight Wheels”, fishing reels and fitness clubs I found a whole reference to historic wheels, with weights and values.

My options boiled down to 4 wheels: The Ashford Joy, The Babe Pinkie, The Louet Victoria and the Bosworth Journey Wheel.

My first desire was to go for the Babe Pinkie.  The lightest of them all and with a name like that who could resist?  After a long email exchange with  the woolery.com I discovered that although ultra light weight, it was made from plumbing parts and was unlikely to be robust enough for mountaineering. Even after I explained that English mountains very rarely took more than 2 hrs to ascend and have very little requirement for ropes and karabiners (The Woolery is in America) I figured 214 ascents would be more than this light weight wheel could cope with.  In addition the treadles were designed for children’s feet and mine are a size 9 (43) plus walking boots.

Wanting something more substantial than a plastic toy, and ruling out the Bosworth Journey Wheel (even though it was designed in a carrying case and I had been offered the opportunity to buy the most historic example in the country)  I had to chose between the Joy and the Victoria.

If you google Ashford Victoria you get train times.  So having made that mistake, I now know the difference between the two makes and models.  The Louet Victoria is lighter than the Ashford Joy by 3 kg and comes with a carrying case.  My decision was made and my pennies spent on probably the 4th most expensive purchase of my life (House, Car, Racing Bicycle, Spinning Wheel). 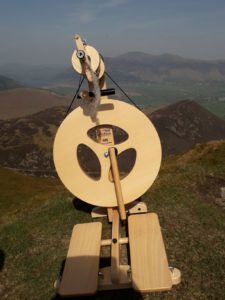