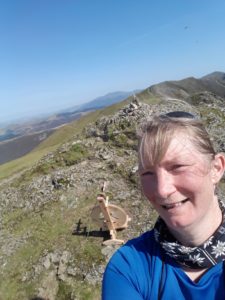 To say it was the most beautiful day of summer would be possibly not true. It was the only day of summer  – Saturday 24th August 2019 The Bank Holiday Weekend.  After 3 abortive attempts to take on rounds of 5 or more Wainwrights and only achieving 1 solitary mountain, over the previous 2 child-free weeks, at last, the weather had played ball.  After dropping off Ane (my gardening/spinning/Wwoofer from Denmark) at the bottom of Rannerdale Knotts we headed back to the base of Whitside.  Mark and Bheinn walked with me up the first 2/3rds but morale and timing meant they had to head back to pick up Ane, so I more or less started the “grande” round of 7 Wainwrights alone.

Whiteside was not very welcoming, the legions of flying ants had hot winged it over from Fleetwith pike and were there to greet me, so the spinning was more a post with the wheel then a concerted effort to create yardage.

On Hopegill Head I was greeted by runners coming towards me on the King Kong mini mountain marathon and was later greeted by email by a family who had spied me spinning.  Nobody spoke or commented but as I spun in the peace of the montain top I had been spied by a family lunching behind me on the summit.

Already having gained a lot of height on the first 2 mountains, on the walk from Hopegill Head to Grasmoor I had a sense of height and remoteness. I was high in the mountains in a stunning hanging valley, with blue sky and a stream to replenish my water. I sat for a moment, dizzy and overheated, until I realised I had my reading glasses on my head and I was magnifying the sun into my brain cells (that’s another 25 I’ve lost). The summer was certainly making up for lost time.  Grasmoor looks like a huge lump and the amazing plane you find yourself on at the top is quite something else.  I wondered if at Calvert Trust they had considered how or if people with limited mobility could me transported to the top to enjoy wandering around the top, picnicking and enjoying the best views I have ever seen of the fells.  I think you can see everything if you look East South East (apart from Whiteside and Hopegill Head which I had put behind me)

Wandope was a particular low point.  It is just a short lift up from the coll as you come off Grasmoor BUT as I wandered up it I could see the grass moving and glistening silver.  The flying ants (now low flying or landed) were EVERYWHERE!!!.  Spinning was limited to opening the bag, taking out the wheel, adding the bobbing turning it 5 times and absolutely NOT getting cosy and running.  Not sure why they all wanted to be there.  I suspect it was an altitude thing.

Eel Crag was thankfully ant free and the views changed from vistas of the whole southern and central fells to the Causey Pike,  Skiddaw and the path East towards Derwent Water and Stair.

The route to Sail was quite exposed and the sun had started to drop giving me the sense of how long the day had been and why I was feeling like I had done more exercise than I had for many weeks.  From Sail to Scar Crags was a zig zag motorway worthy of an alpine pass so I made swift progress.  On Sail I met 1 man only the 5th walker /group I had met that day. Where were all the tourists, mountaineers and walkers?  Considering the spectacular nature of where I was and the fact that it was the summer bank holiday it seemed unbelievable that I had met so few people.

I doubled back from the top of Scar Crags,  greeting the Swaledales and Herwicks grazing on the top, knowing I would be quicker on the path than heading towards Causey Pike and cutting direct to the track on the fell race route (however passing from below I could see the route of the fell race had caused a new path to be formed).  The phone rang and Mark worrying that I was overdue had headed out to meet me.

My best day ever. 7 spinning Wainwrights ticked.  I was surprised by lack of people and squadrons ants, and I learnt that it is not sensible to wear my glasses on my head when the sun is shining. 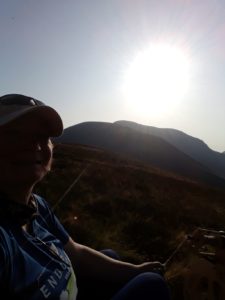 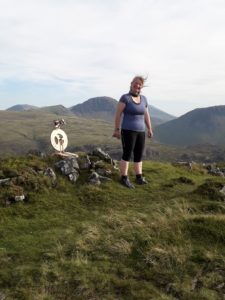 It was the call I had hoped for;  Cumbia Life were interested in my story.  Not just the Spin A Round challenge but the whole back story, the where the Spinning and Weaving business idea came from, why I was spinning Herdwick, how the business was growing.  Interview behind me and a first aborted attempt to stage the photoshoot postponed due to the uncooperative  weather not playing ball, late on a Saturday afternoon I met Phil the photographer at Honister Slate Mine with Ane, (my volunteer gardener with the Wwooff UK scheme, with her own portable spinning wheel – I was not alone) Mark and Bheinn. Starting at the slate mine may seem a soft option but trying to keep up with Phil who seemed to fly across the rocks up the mine tracks made this one of the quickest ascents I have made – and possibly the fastest photoshoot on record!  If you look closely at the photo you can see the thousands of flying ants which have settled on the bag. They settled in our hair, in the wheel bag, on the cameras, the lighting equipment, down our clothes and swarmed the summit cairn.

Running away from the summit, we re-convened about 20 m down to try again.  Scafell Pike and Great Gable forming the dramatic backdrop for the strange sight of a victorious spinster.

On the way down we disappointed Phil by being a family of very poor Sheep rustlers trying to sneak up on the resident Herwicks to turn them into media stars.

Following the excitement of modelling on a mountain top, and ticking off my 50th spinning Wainwright, strangely, I could not sleep.  Despite a career in marketing and promoting somebody else’s business I felt self-conscious promoting my own.  The sleepless nights were short lived. Now I am excited to see how my strange venture will be portrayed and what other calls will come…

Planning for what to do with my child-free summer holiday fortnight  – of course ticking off a serious number of Wainwrights. But this was not to be.  Why?  It rained solidly for 2 weeks.  I felt sorry for the campers who had chosen just these weeks for their holidays and felt sorry for me. My plans for a 2 day clear up of the NW fells above Buttermere, and a 6 top yomp from home to Wasdale became 1 quick trek up Whiteless Pike and many days setting up a weaving loom.

The day had started seeming quite benign. The sun was shining but there was a bit of a nip in the air warranting the inclusion of a thicker 2nd layer to be carried.  It looked like we were heading upwards to a perfect day for 6 tops between the car park at Buttermere and the Swinside Inn.  Mark was going to accompany me over Whiteless Pike to Eel Crag and then I would continue over Sail to the northside of the Newlands Valley and he would head back to the car and meet me at the Swinside Inn at Stair.

BUT mountains can be unpredictable.  What looked like a perfect day from the valley bottom turned out to be a dangerous folly.  As we ascended the wind speeds and gusts were knocking me off my feet.  The further route on from Whiteless Pike to Wanhope looked exposed, was another league into the higher tops and further underfoot.  Taking refuge in the lee of the top of Whiteless Pike we assessed the map and decided that a 2nd round would be required to gather up Whiteside and Hopegill Head and could then include Eel Crag and Wanhope. So Whiteless Pike became the 49th spinning Wainwright and a cautionary tale to be prepared for anything in the mountains including turning back even if you feel you’ve only just got started.