MOUNTAIN CRAFT PUT TO THE TEST

This was probably the worst weather day I have been out with the wheel. The mist was down and it was cold. I had intended to park at Mosedale, but Mark persuaded me to drive up to Carrock mine with the promise he would cut back and fetch the car. We were treated to the spectacle of hound trail dogs successfully or not so plotting a course across the fell side.

We discovered the MBA (Mountain Bothy Association) Lingy Hut, which is beautifully kept. As we came out, after sheltering from the wind, we were greeted by a group of ultra runners on the Cumbria Way (mile 20 of 38 for the day and that was before lunch!) to discover that Jenny Rice had stayed at our barn and another runner had already followed my spinning journey. Small mountain world! 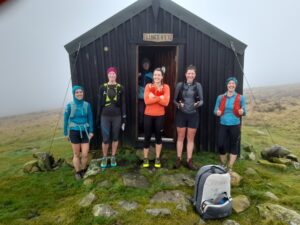 The Mercer family who popped up on High Pike commented through the mist that, “it looks like a “KIWI”  – I was very impressed that the dad knew a Kiwi was a type of spinning wheel. Alas he was talking about the symbol on the Cairn. However, the wheel was signed (hands sanitised) by their Wainwright climbing children and we enjoyed their company on  the summit.

Descending from Carrock Fell turned into a true mountain adventure when the path contouring from Further Gill to Snail Shell Crag disappeared. To begin with I wanted to cry, but having Bheinn with me (Mark had left us at the top to double back for the car) I told myself not panic and that I did not need to call out the mountain rescue – yet!  I had a torch, map and compass. This was my money, where mouth is time for every occasion I had mentally berated foolish walkers for not carrying appropriate navigation equipment, or knowing how to use it.  As the cloud cleared I could take a back bearing from the farms and aim to a distinctive field pattern. When we met the path it was small and indistinct and I don’t think we had been that far off it at any point. Bheinn loved the adventure. I loved the nerve calming pint in The Mill inn. A great mountain day! 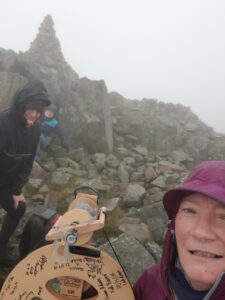 For a chance to win a rug woven with the Herdwick wool spun on the Wainwrights like this post, follow this page or share your photo of me spinning with the #spinherdwick .
#candocalvert #louetnorthamerica
Raising money for the Lake District Calvert Trust
The new giving page is at Virgin money:
https://uk.virginmoneygiving.com/SusanDenhamSmith
LEARN TO SPIN www.wildwoolbarn.co.uk

The One That Just Would Not Go Away – 110 High Rigg

High Rigg is one of the smallest Wainwrights with the least amount of ascent from the car park and it is the 4th time I have attempted to get to the top (on this round).  Instead of walking from the Thirlmere end car park, we took the short route from the St Johns in the Vale church and finally got to the summit. 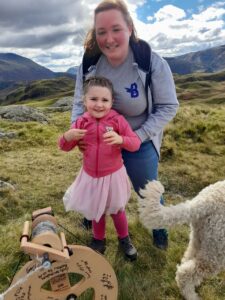 This is Skye and her mum on her first Wainwright.

Skye is the youngest person to sign the wheel. Her name is in pride of place right on the top.

Mark had a lovely conversation with a fellow photographer comparing cameras and the pros and cons of replacing the body but needing then to replace the lenses too.  The conclusion was possibly that they should both keep saving and enjoying using what they have. 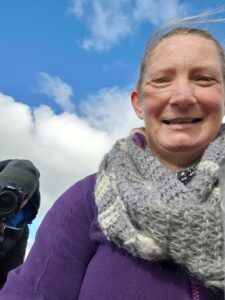 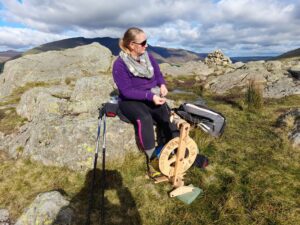 Time to sit and spin and relax

I have never walked Blencathra from The Blencathra Centre side, but what a delightful route.  We used to run it from The Packhorse pub, before work, many years ago, but now I realise we really missed a treat.  The assent is short and sharp – made easier by the drive to 300m for the start.  Once at the top there is an amazing ridge walk to the summit.  And who should we meet but Graham and his daughter (wife and son) finishing her round of Wainwrights.  A very dedicated and inspiring young lady, who was the first to sign my wheel.  I was thrilled to see her finish along with a “socially distanced” crowd of strangers. No organised party unfortunately due to the coronavirus rule of 6 having been introduced.  We could not wait to leave the summit.  Bundled up against the -10 windchill with all my clothes put on in the wrong order to look look like “Barbapapa” (google it if you are under 50), we descended to Mungrisedale Common in record time. The top of Mungrisedale Common is the most disputed Wainwright out there, but if you are on it you can see a 360 degree view of mountain tops.  I get it. Great Mountain! 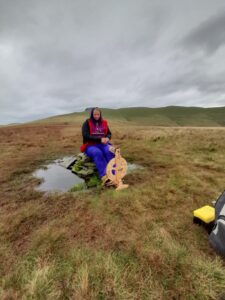 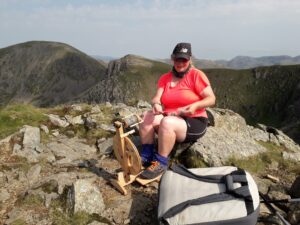 I was surprised to find that since I last wrote 3 months and 2o mountains have passed under my feet.  The summer holidays and opening up the Coronavirus social distancing restrictions have both added to my workload as guests started to return to the Bunkhouse, which means bookings and admin, as well as washing, ironing and lots of cleaning.

88-90 – Middle Fell, Seatallan, and Buckbarrow, a pleasant round, although the steep climb up to Seatallan freaked me out slightly and felt like I was on a vertical face.  Head down, don’t speak, don’t look up or down.  The distance was just right for legs that have enjoyed their lockdown break, a little too much.

91-94 – Starling Dodd, Red Pike, High Stile, and High Crag, the ridge from our front door, made this feel really special. Even the cheeky dog on Starling Dodd stealing my sandwich and nearly impaling it’s owner on the rusty pile of old fence posts on the summit could not dampen my spirits.  Feeling my age and lack of fitness Mark and Bheinn had driven around to Buttermere and met me on top of Red Pike, after an hour’s wait, all the more frustrating as it was a lovely day and Mark’s camera battery was flat. Descending High Crag was as difficult as I remembered from many years ago, with loose scree in all directions. Bheinn and I bum-shuffled down and I vowed to buy some new, aggressive-soled Inov8 fell shoes.

95-99 Caw Fell, Haycock, Scoat Fell, Steeple, Red Pike.  I had aimed to reach the 100 tops mark today, but this was the day that conspired against me. The Forestry Commission had added a lock to the track down the valley as too many staycationers were driving down with camper vans and tents to wild camp. We had planned to use the road to take a 3 mile walk-in off the day.  It was also the hottest day of the year so far and despite 2 litre bottles of water I had started to feel dehydrated by Scoat Fell.  After hopping across to Steeple and meeting a friend of a friend who kindly took photos and a movie shot of me on the top, I weighed up my options for a hasty retreat .  My original plan was to sweep up Red Pike and finish the day over Pillar with a 5 mile walk back home. Leaving Red Pike unclimbed was really not an option as it stands in the middle of 2 groups of mountains that I would have to reascend to bag it in the end, but I had run out of energy to make the distance and height gain of Pillar. So my options were to walk straight back the way I came after bagging Red Pike, alternatively I could follow the ridge to Grike and descend to the Cold Fell Road, or the last but more obscure option was to head South over Red Pike and possibly also over Yewbarrow and descend into Wasdale and call on the goodwill of Mark to drive around to collect me.  He was not too impressed, but showed his love and dedication by making the 80 minute round trip. Reaching the summit of Red Pike I knew Yewbarrow was out of the question.  I think I had a touch of Heat Stroke, feeling dizzy and sick, I descended to the valley desperate to find water and thrilled to see Mark on the lower flanks of Yewbarrow at Dropping Crag. Thanks to the generous couple on Caw Fell who donated their pre-covid emergency rucksack fund to the Calvert Trust

100 Yewbarrow – Of all the people in all the places, I met Graham from the Head4theHills group on the summit. Mark had walked over from Ennerdale and caught up with us as we were just about to descend, having experienced my walk from last week with an equal amount of dehydration. 100 felt like a great milestone but the one I am looking forward to is 107 the half way point.  Thank you to the 2 lads who made a generous donation to the Calvert Trust.

101, 102, 103 High Spy, Maiden Moor, Catbells. It was rather a cheat but not to be knocked, to drive to the top of Honister and walk back down to Cat Bells.  The plan had been to park at the bottom of Cat Bells and get the bus up to Honister, but all roadside parking had been blocked by double Yellow Lines and the field car park was not open.  So we drove up Honister, walked the ridge in reverse, and then planned to get the bus back up the pass for the car. I had downloaded the bus timetable, so imagine my surprise/upset/annoyance, when we arrived at the Catbells bus stop to be greeted by the sign that said the nearest bus service was Seatoller – 7 miles away.  The bus helpline was no help denying that the 77 bus from Keswick and a bus stop called CatBells existed at all.  Keswick TI phone line was picked up by a call centre – not in Keswick, so was unsure if it was running or not.  The Ice Cream Van Man however confirmed that the bus was running. Having come equipped with pen to sign the wheel I was able to leave a note for other walkers who thought they were in a pickle and to help the bus company improve their fares for people who otherwise would think the bus was not running. 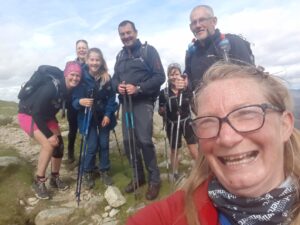 104,105, 106, 107 – and half way. Wetherlam, Swirl Howe, Great Carrs and Grey Friar  I have been looking forward to climbing the Conistons for a long time.  They sound and look dramatic, and I always feel I am in a Swiss village in Consiton itself. We had planned to climb all 7 but despite a very early Sunday Morning alarm at 6 and leaving the house by 7:30 the journey is long and my pace was slow. On Wetherlam we learned of James Forrest who is attempting an unsupported round of the Wainwrights in 18 days.  I commented that it will be the 6th fastest of all time, Alan Heaton, Joss Naylor, Steve Birkinshaw, Simon  Barnett, Paul Tierney (chronological). The reason I knew this information as I had met Simon Barnett when he completed his 14 day walking round and discovered at the time he was the 4th fastest completion, but the record keepers at The FRA/LDWA and Wainwright Society did not seem interested, so as I write there is no official record of the fastest Wainwright rounds.  Mark and Bheinn were with me on the round and we had great fun as they distracted themselves bidding on Warhammer figures on Ebay.  Coming off Grey Friar, time and space and a very tired 13yo (and mummy) suggested that it was time to beat a retreat to dinner in the pub.  The pasta bake at home would serve a meal another day.  Surprise of the day.  Who should we bump into again but Graham Davies, from Head4thehils who we met on Yewbarrow. 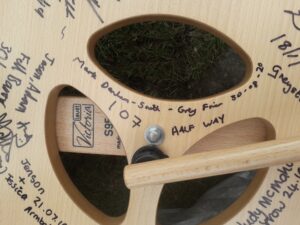