The depths of winter and the red dots of “Bagged Fells” are filling up the map. Ling Fell is the last one on the left as you drive towards Cockermouth and is yet another one that feels small and insignificant and just for “off-days”.  This was truly an off day.  Huff Puff, sweat and suffer, who would have thought number 84 at just 373m and 205 on the list would lay me low, not just on the bum-sliding steep descent but a 3 hours sleep when I got home.

For 6 months, a very long time ago (pre child birth), we lived in a caravan at the foot of Barf, and considered The Bishop our own personal guardian angel. We ran up and down most days and I considered the ascent on this day would be a hands-in-pocket walk in the park. It was steeper than I remembered and the bad step not even a consideration back then.  The 2 meter scramble up over a small rocky stream had me clinging on for fear of slipping on the way up and bathed me in worry for the descent.  I looked out for an alternative way down.  I was sure there was a forest ride along to the East in the Whinlatter Forest, but my memory was hazy, as were my photos as I had left my phone in my trouser pocket and the lens steamed up.  I am not as flexible and confident in the hills as I used to be, it is truly a good many years since we lived below Barf, and on the way down today the bad step became my nemesis.  Maybe I had built it up in my mind to be more difficult than it should have been and I became crag fast. 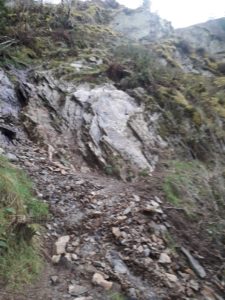 Mark tried to support my foot as I lay spread-eagled across what was really a very small boulder with only a few feet between me and solid ground, and then I froze. I could see no way out I could not go up and I could not go down and a sense of dread came over me that the only way down would involve pain, falling or the mountain rescue and tears.  The tears came and the panic subsided and inch by inch, like some macabre Hokey Kokey, I put my left leg down, my left leg up, down, up, down, up,  and then the left hand, and then the right and eventually I manoeuvered the 3ft to the floor.  I don’t think I will ever go that way up or down Barf again and when my back pack is not full of wood and wool I will include a 3m rope and body harness. I understood that panic is not a sign to flee, it is a state where you can neither fight nor flee.  There is no way out.

Sale Fell was a long time coming for my friend Christine who actually wanted to do Catbells, like everybody, for it’s super name. After many false promises to deflower her boots we finally chose the worst day of the year on a very different peak.

We chose the winding route  along Wythop Beck past Kelswick farm. The gorse was thick and our trousers were thin against the spikes and against the biting wind.  The top was marvellous. It reminded me of the ski/board-cross slopes in the winter Olympics and having been up here in the snow a year or two ago I once again logged Sale Fell as my go-to place for winter sports.  Despite the silencing howl, and the hood-stealing strength of the wind, we headed in good visibility straight for the wall and the car park and slightly stale cheese rolls.

Every Fell has surprised me as being the giver of great views and unexpexcted emotions.  Easy Peasy Ling Fell, Panic on Barf and Freezy Friendships on Sale Fell.  All new experiences, all new emotions, all different, all shared.