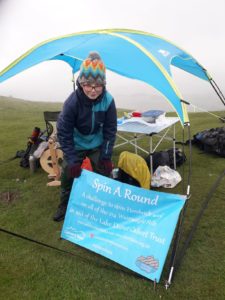 It had taken 2 years to get to the point that I could “Launch” the Spin-A-Round Challenge. Life, building works to our house, business and family matters had always contrived to take precedence, so  it was  on 2 June 2019 at 9am, 2 years after I had bought my mountaineering spinning wheel I set off for the summit of Latrigg above Keswick in the Lake District with Mark and Bheinn to Launch the challenge to spin Herdwick wool on the 214 Wainwright Fells. It was a 3-person job to carry my wheel, leaflets, sheep biscuits, chairs, table, banner and a shelter.  More kit than I plan to take for the regular spinning walks, but we hoped to host a picnic for the Calvert Trust volunteers and have a chance to showcase the spinning wheel and challenge.

The shelter had been a last minute decision and in the tradition of all all great, daft events it was erected for the first time, on the mountain, in the wind with the instructions tucked under my chin.  Assembly was easy, keeping it up was more of a challenge.  When I had considered the need for shelter from the rain, I had overlooked the fact that in the Lake District it is a certainty that rain will be accompanied by wind. The shelter proved great at keeping the rain off, however keeping it in place to stop it taking on a secondary role as a paraglider proved a full-time occupation for my helpers and supporters, so taking the idea of “Launching” an event to a whole new level.

Despite the inclement weather we were joined by a steady stream of passers-by, runners, dog walkers, parents carrying 2 children and regular Lake District visitors. Some who had made the journey specifically to see and support the launch and others, who found us by chance and thought it was the most “surreal” event they had witnessed on a mountain. 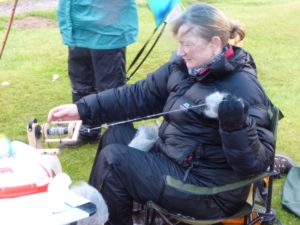 I felt very honoured that so many volunteers and supporters of Lake District Calvert Trust came out on this rather wild day and I enjoyed many conversations about spinning and the work done by the Trust to make this spectacular place we live in accessible for everybody. We were even featured on ITV Border TV (Link below), Fiona the reported captivated by the unusual notion of the event and my determination not to give up because of the conditions

The weather conditions were not as I had envisaged, but that served as a great reminder that the challenge was not going to be plain sailing, even if that was what the shelter thought it was made to do.

To support this wholly surreal challenge go to https://wonderful.org/fundraiser/spinaround-740bcfeb