On Saturday 15th June 2019,  after a wonderful morning learning how to blend wool on a blending board at Mungrisdale – a simple and most effective process making ammonite-like rolags for spinning – I set out alone for the first time with the wheel to head up Souther Fell looming above.

Although tempted to shin over the fence and head straight up the shoulder I feared the wrath of the land owner who had specified that walkers should not cross the fields.  The map gave no clue to the direct access so I took the cowards decision to walk the long route to the west of the mountain.  I had hoped to sweep up Bannerdale Crags and Bowscale Fell on the return journey, but feeling my age, or just not having walked my mountain legs in yet, I fretted my indecision. Head down listening to my internal dialogue I caught up with 2 ladies I was a aware were walking in a more relaxed and carefree manner.  I commented on their laissez-faire demeanor and they confessed they were out for a wander, not sure where they were going and hoped their discussion about the reasons for choosing a termination had not disturbed me – one being a midwife.  I had not heard, the negative chatter being so loud in my head. I wondered what I was fretting about and I determined that I should enjoy every step or the journey was not worth it.  As we fell into step they noticed the pack and asked about its contents.  I had not considered that on the outside it looked anything out of the ordinary on the fell and again I marvelled that others took so much more notice of their surroundings with open interest, again I pushed the worries away.  I was experienced, equipped, although the wheel might cause a few scratched heads on a mountain rescue call out – the first spinning wheel to be rescured, I had map compass, safety gear, I was in the place I wanted to be, if I did not complete 3 mountains, “who cares” I will have competed 1. 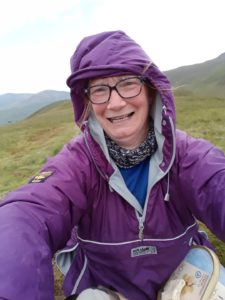 Hitting the summit ridge and seeing how much time and expired as well as my food, I decided 1 was good.  On the summit of Souther Fell facing the next great challenges of the mighty Blencathra and the lesser known Bannerdale Crags and Bowscale Fells I formulated a plan to come back after the next spinning group in Mungrisedale and set out before and not after the class.  I took my first selfie dropping the camera many times before I caught anything usable and followed another couple with 2 dogs down the shoulder and circumnavigated the fields I could not cross to the back road and on to The Mill Inn for a well earned pint. 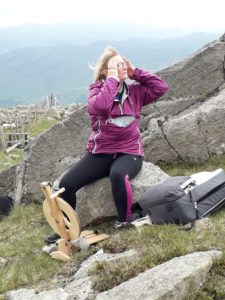 This is what it is all about!  My family together on an easy to reach round of high fells.  Using the English equivalent of a cable car in the form of the road to Honister Pass, to take the sting out of the climb, we headed out for a round of the “G’s” and the “B’s”  as my mind summarised them, Grey Knotts, Brandreth, Green Gable and Base Brown –  numbers 24-27.  I wondered at the 360 degree viewpoints as we sat on Brandreth and then Grey Knotts and I spun.  We could see almost to our house and understood why there are objections to the artificial nature of uniform trees planted after WWI in Ennerdale compared to the serene unspoilt landscape of Buttermere/Loweswater. I looked up to towering imposition of Scafell and Scafell Pike and identified peaks in the Langdales astounded that all this was on my doorstep.  Bheinn and I dodged the weather just receiving a passing shower as we descended together into Seathwaite.  Mark had retraced tracks over Green Gable to retrieve the car. Bheinn and I thought we had taken the easy route direct to Seathwaite. Unfortunately I forgot that the most direct is often the steepest route. The wheel learnt to scramble and free fall, and I spent a lot of time moaning about wet paths artificially made of rocks aimed forwards. Excellent for ascending, treacherous if you put your foot on a smooth rock on the way down as I discovered twice.  Needless to say Mark was waiting for us at the bottom having read quite few pages of his book and I vowed never to descend from Base Brown to Seathwaite by the direct path ever again.

Spin-A-Round is a challenge to Spin Herdwick Wool on the top of all the Wainwright Fells in the Lake District, Raising money for the Lake District Calvert Trust
https://wonderful.org/fundraiser/spinaround-740bcfeb