In August I had intended to tick off Hen Comb on a walk out from home to Melbreak on the “Another Wainwright Day”, but bad weather had cut the walk short.

Again the weather was not the best, but that was to be expected on 31 December 2019 it was blustery and cold, low cloud but this time no driving rain. I walked from home and about 500m onto open fell I met a couple ahead of me who were walking in my direction, but had stopped to admire the view.  They explained they had walked from Loweswater the previous day but realised they were running out of time so had headed back without finishing the walk.  The day after they were finishing the last part of the walk in reverse up from Ennerdale, determined not to leave the walk incomplete.  I was in admiration and shook Nick’s hand hoping that some of his determination to finish would rub off on me.

The summit of Hen Comb was cold and very windy, but I found a sheltered spot just off the top and spun in peace.  However when I packed away, the wind-chill was freezing and my soaked hands were numb. Visibility was about 5m and with hands cold as ice it was the first occasion on this round that I have had to use the compass in anger. I now carry a second pair of gloves, learning that the times you will need to use your fine dexterity will always be in the toughest conditions, and those are mostly when it is coldest.

Not deterred by the cold, especially when there is a wager at stake I also had to message Mark to update on my position.  The deal had been whoever made it to the Kirkstile pub first had the right to a 2nd pint and therefore would not be driving home.  I took great delight in informing Mark I was on my way down an hour ahead of schedule, at speed, to enjoy my first pint while I waited for him to arrive.  Despite the number of mountain days being less than average in December I was delighted to feel less unfit than I had expected, and was well down my first pint when the transport arrived. 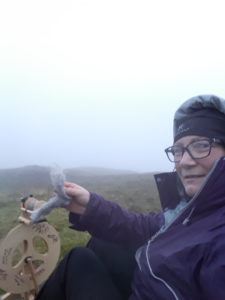