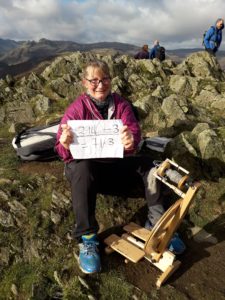 September and October felt rather quiet.  School was back but The Wild Wool Barn and Workshop was still in Summer mode with many visitors and guests taking much of my time.  But despite my mountaineering not feeling frenetic the tally increased by another 13.

Raise (Helvellyn) and White Side

I had forgotten what a masterful ridge the Helvellyn to Clough Head straight is.  The undulating top stretches for miles and attracts all types of outdoor enthusiasts including skiiers, mountain bikers, Bob Grahamers, Fell runners and “spinning walkers”.  The aim had been to do more but my energy levels dropped as we ascended to the ridge, probably at the thought of the packet of emergency Quinoa having been used to stabilise the wheel on rocky ground, or maybe it was just the thought of the Quinoa instead of a bar of Galaxy!

Is a steep climb out of Western Wasdale and is always accompanied by the feeling of lethargy as it is the one you do when you can’t be bothered to drive to the central lakes and just want an easy (not so!) walk.  Back to the Shepherds Arms in Ennerdale for roast dinner as the Screes and Strands were variously fully booked or did not serve food.

A day of rare couples freedom.  Bheinn was on Scout camp so we headed to our old stomping ground of the Northern Fells.  The wind was so fierce we could barely speak so it was a very quiet day and the wool spun upwards.

A full family day and always an easy climb but again autumn winds made for a very fast retreat to The Bridge Inn Buttermere for late lunch – yum.

When I had completed the big round of Buttermere tops in the Summer I had left these 2 so was looking forward to clearing them up. Walking  the easy path from Newlands with the flank of Barrow  on our right hand side we waved at brave canyoneerers, in the river below.  I would not be brave enough but Bheinn and Mark would have liked to try.  A rainbow seen from Barrow over the chocolate box view of Derwentwater I always thought was a fake made for a perfect day not spoilt by the fact that  The Swinside Inn was closed due to winter opening times so I was unable to use my Lake District “£s” so we revisited an old haunt, the Coldeale Inn.  We are starting to become experts in the pubs that serve food all day, an absolute must for walkers who traipse off the fells at all hours of the day.

I had planned a long walk back from Wasdale to Ennerdale home, but as we left the valley I noticed that the tops were covered in snow. As the wheel is heavy and does not contain much space for lots of bulky winter gear I decided that a long winter traverse was not going to be sensible.  Even more sensible would have been to check the weather forecast before departing. Will I ever learn?

So caution being the better part of valor Mark drove me to Butermere and I planned a longer but lower level route along the Ennerdale fells from East to West, but Haystacks was more of a climb than I expected and the squally weather including sleet and snow forced me down the Ennerdale Valley floor and a 7 mile walk and talking to the Ennerale Ultra runners. This brought back memories of hundreds of hours of training runs in the valley in the days when I joined the ultra runners in their passion to push their bodies further than they expected.  Now I think I enjoy taking my time, walking within my limits and seeing the views.

Loughrigg 71 – 1/3 of the Wainwrights Complete

I was accompanied by and old school friend whose struggle with dodgy knees made this a great feat, and I am sure endurance of pain on the way down.  I never used to think that milestones such as a 1/4 a 1/3 or half-way were worth any celebration but this time I feel chuffed and proud. I am amazed that I am already 1/3 of the way after only 6 months and had not put a finish time on the challenge but am starting to think I might be able to make it by the end of summer 2020.